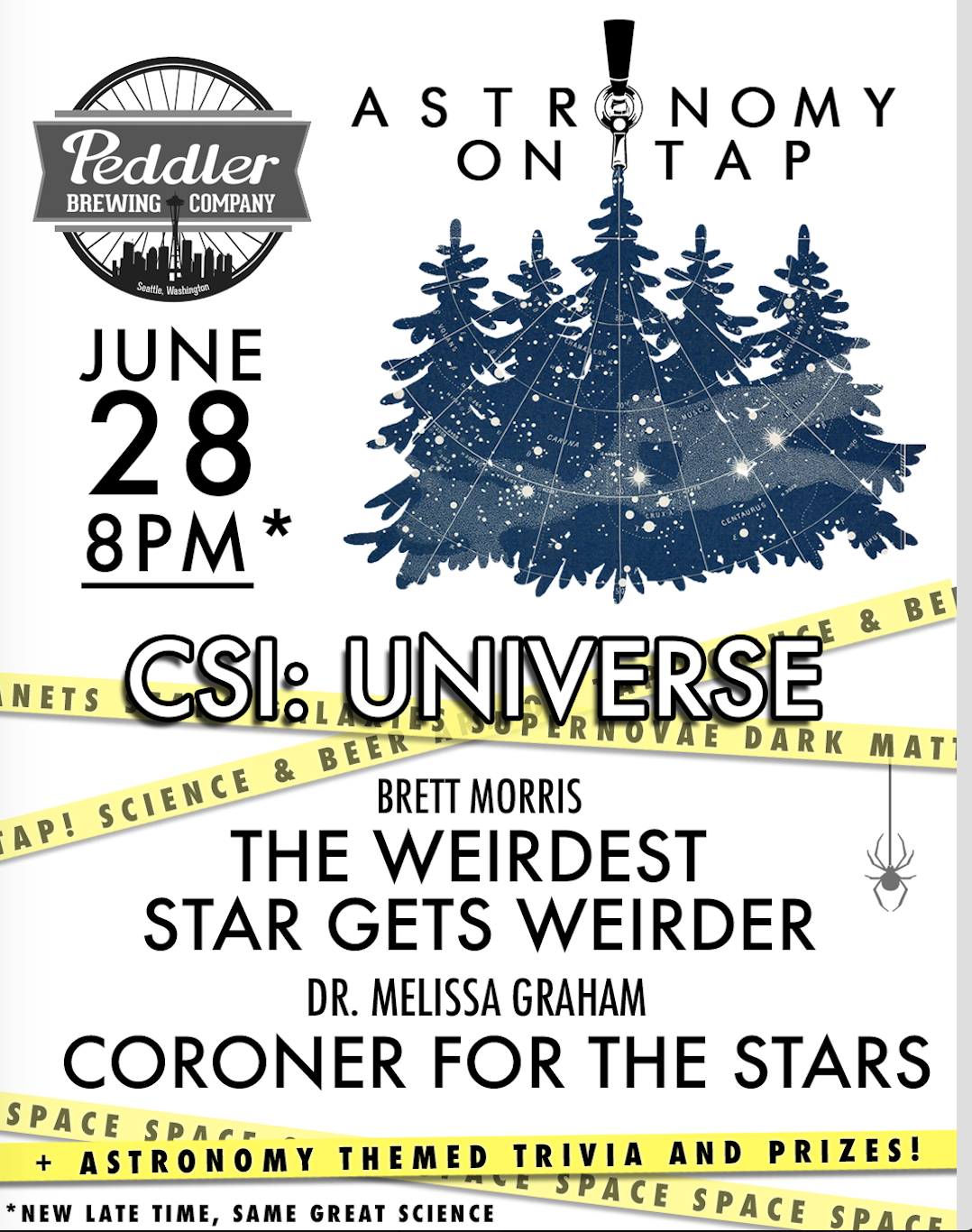 THIS MONTH we will be joined by Dr. Melissa Graham*, who will speak about her research as “Coroner For The Stars,” working to unravel the mysteries of supernovae. We’ll also hear from our venerable co-host Brett Morris* on “The Weirdest Star in the Universe Gets Weirder”, an update on Tabetha Boyajian’s star (KIC 8462852) in light of its recent misbehavior.

Please note that this event will begin at *8pm*, since the sun will set late!

Speaker Bios
————-
Brett Morris
Bio: Brett is a fourth year PhD candidate in the dual-title Astronomy and Astrobiology Program at the University of Washington and co-host of Astronomy on Tap. His research interests sit at the intersection characterizing exoplanets and their host stars. Brett works with ground and space-based observations to measure the compositions of exoplanet atmospheres, planet masses, and properties of planet-hosting stars.

Dr. Melissa Graham
Bio: Dr. Graham currently work as an observational astrophysicist in the Astronomy Department at the University of Washington. Her main research focus is supernovae, especially thermonuclear explosions of carbon-oxygen white dwarf stars. Supernovae are stellar explosions so energetic they can produce the light of a billion suns. Supernovae exhibit a variety of characteristics, and most of them are in galaxies so far away that even when pre-supernova images exist, the original star cannot be resolved. It is important to understand how stars explode because supernovae release the heavy elements fused in the star’s interior so they can form metal-enriched objects like planets, and also because supernovae are used as “standard candles” for cosmological studies of dark energy. In her talk, Dr. Graham will describe how her observations with a variety of the world’s prominent astronomical facilities such as the Hubble Space Telescope are helping to untangle the enigma of how different types of stars create the variety of supernovae we find in the Universe, and illustrate the mysteries that remain to be resolved by future facilities such as the Large Synoptic Survey Telescope.