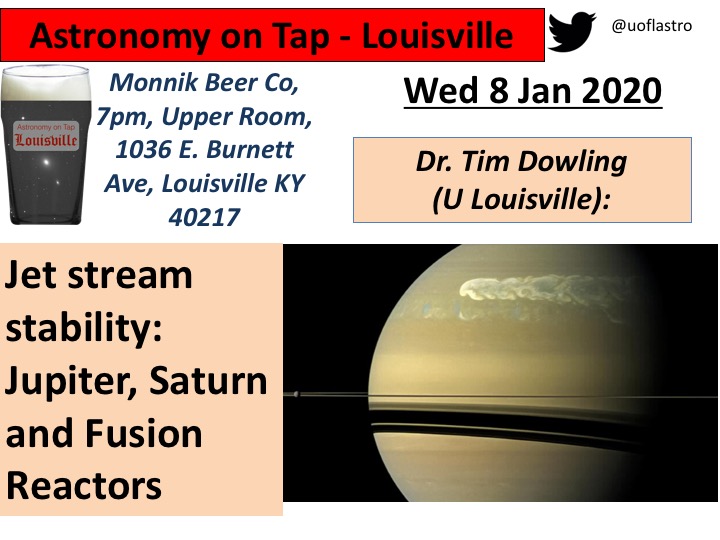 Jet Stream Stability: the Newest Mach Number and what it tells us about Jupiter, Saturn, and Fusion Reactors
Wed 8 Jan 2020
Dr. Tim Dowling, U Louisville

Jupiter has dozens of alternating jet streams that have now been extensively observed by the two Voyager flybys, the Galileo entry probe, the Cassini flyby, and the Juno proximity orbiter. This has revealed that the analogue of the Mach number for vorticity waves, ‘Ma’, is central to understanding the long-mysterious properties of shear instability. The results have far-reaching consequences for large, fluid systems involving shear, including the meandering of jet streams, the formation of planets in protoplanetary disks, and the confinement of hot plasma in fusion reactors. We will examine how the concept of ‘Ma’ clarifies the physics and makes specific predictions, including about Jupiter’s deep jets and Saturn’s length of day. The lessons from Jupiter have taken most of the guesswork out of the prediction and control of shear instability. Dr. Tim Dowling (UL) will swirl us through the details. We’ll see you at Monnik Beer Co., 1036 E Burnett Ave, Louisville KY 40217 at 7pm in the Upper Room.