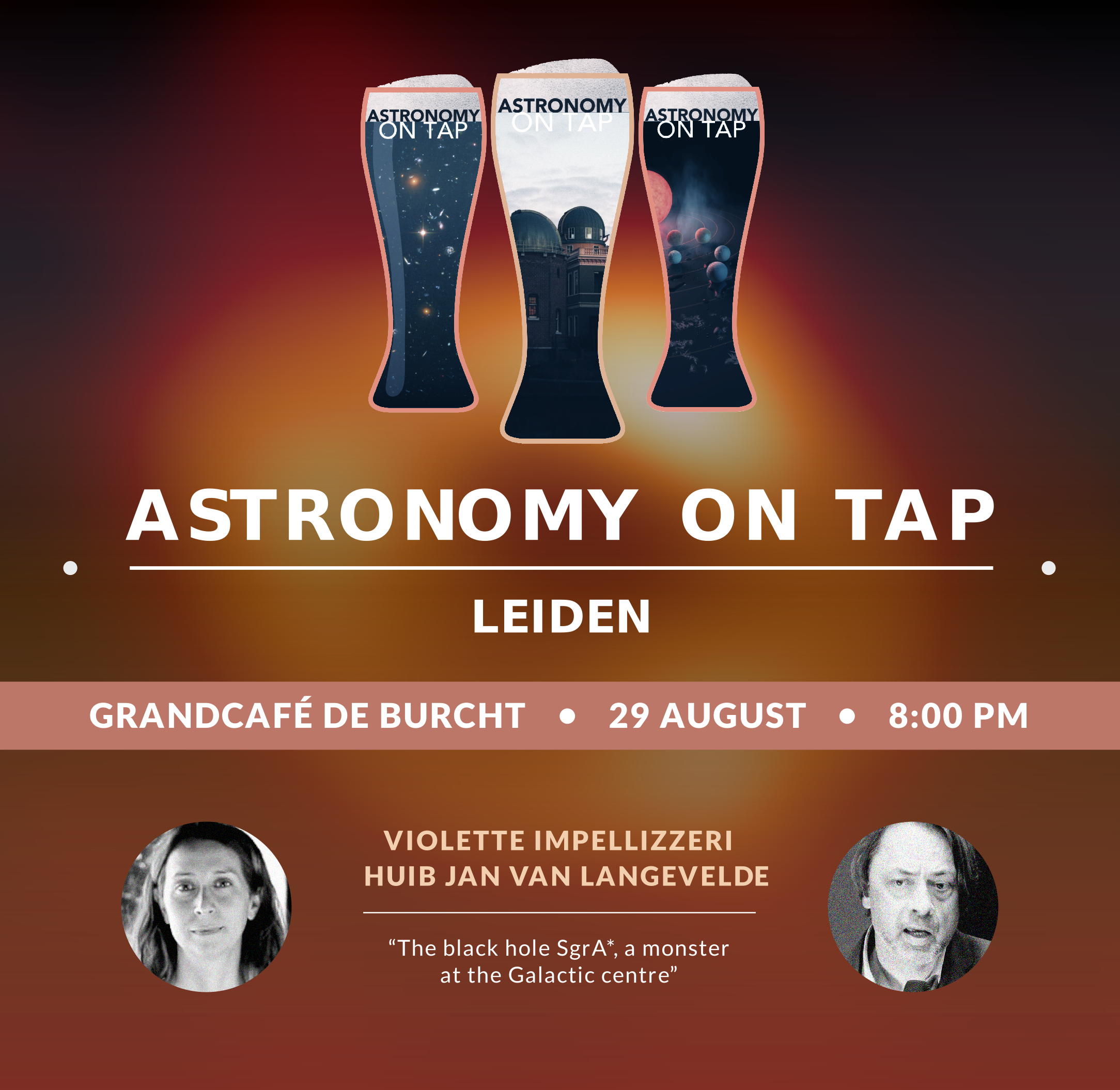 Our next event will take place on Monday 29 August at Grandcafé de Burcht (Burgsteeg 14, 2312 JS Leiden) at 20:00 CEST! We are delighted to have as our speakers Violette Impellizzeri and Huib Jan van Langevelde who had leading roles in the international collaboration that produced the first images of the Supermassive Black Hole at the centre of our galaxy. They will tell us all about this journey and the black hole SgrA*, a monster at the Galactic centre. Join us for an evening of astronomy and fun games where you could win cool science prizes!

Register at https://aotleiden.eventbrite.nl/ (not required for entry but will help us gauge the number of people attending)

The black hole SgrA*, a monster at the Galactic centre

In this talk, Violette Impellizzeri and Huib van Langevelde will describe the observations of the Event Horizon Telescope (EHT) that led to the first images of the Supermassive Black Hole at the Galactic Centre. The EHT is a telescope composed of specialised millimeter telescopes around the world that allows astronomers to zoom in on the centre of the Milky Way. The black hole casts a shadow on the emission of hot plasma, swirling in the strong gravitational field, as could be expected from Einstein’s laws of gravity. The speakers will discuss how this and other measurements reveal the practices of these monstrous black holes.

Violette Impellizzeri is an astronomer at Leiden Observatory, where she manages Allegro, the Dutch node of the European ALMA Regional Centre. She did her PhD at the Max Planck Institute for Radioastronomy in Bonn, and then moved to NRAO (USA) for a postdoc. She later moved to the ALMA observatory (Chile) where she worked for almost 10 years, and moved to Leiden in 2020. She is interested in studying the properties of the gas surrounding supermassive black holes using the VLBI technique, the same technique that was used to image the black holes in SgrA* and M87. She is a member of the Event Horizon Telescope Consortium (EHTC).

Huib Jan van Langevelde is employed by JIVE in Dwingeloo and is an astronomy professor in Leiden. JIVE (Joint Institute for VLBI ERIC) is the European hub for VLBI, the technique in which radio telescopes thousands of kilometers apart work together to provide astronomers with the sharpest view on cosmic radio sources. He started his career in Leiden doing a project to study radio stars in the centre of the Galaxy. After spending a few years in the US, he took on different roles at JIVE, where he was the director until 2017. In 2020 he became the project director of the global Event Horizon Telescope Project, the international collaboration that produced the images of the M87 and SgrA* black holes.

Logistical information: We start at 20:00 sharp, so please arrive earlier to enter the bar, save a seat, and grab a drink. We are not planning to stream the event live, but will be uploading a recording of the talks on our YouTube channel after the event.

Join us for an evening of astronomy and fun games where you could win cool science prizes!

For more information check out http://astronomyontap.nl/