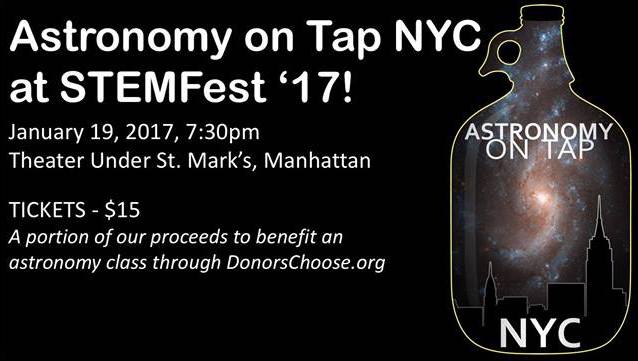 January’s Astronomy on Tap in New York City is a special event as we will be part of this year’s STEMFest, joining our friends at Story Collider and other great shows. The event will be held January 19, 2017 at Under St. Marks, located at 94 St. Marks Place in Manhattan, from 7:30-9:45pm. Our speakers are Dr. Ivelina Momcheva, a scientist from the Space Telescope Science Institute who works on both the Hubble Space Telescope and the upcoming James Webb Space Telescope, and Guangtun Zhu, who held a Hubble Fellowship at Johns Hopkins University.

You can RSVP on the Facebook event page, but please note that this is a ticketed event, with proceeds going to support arts and education in New York. Tickets are available now by clicking here.

Iva Momcheva: Hubble’s Evolving UniverseIva Momcheva received her BS in physics from Sofia University in Bulgaria and her PhD in astronomy from University of Arizona, Tucson. Following research positions at Carnegie Observatories and Yale University, she is now a scientist at the Space Telescope Science Institute in Baltimore. In her current position, she is responsible for making sure the Hubble Space Telescope continues to produce its beautiful and scientifically important images with the Wide Field Camera 3 instrument. In her research, she works on understanding how distant galaxies evolve. Iva recently had an asteroid named after her: 8260 Momcheva. She will talk about what we have learned about the distant universe with Hubble and what more we expect to find out with its successor – the James Webb Space Telescope.Guangtun Zhu: All the Things We Cannot SeeGuangtun Zhu received his Ph.D. in physics at NYU and had a Hubble Fellowship at Johns Hopkins University. His research focuses on galaxy formation, the distribution of matter (dark and ordinary), the large-scale structures of the Universe, and data-intensive astronomy. He will talk about the distribution of dark and ordinary matter, what we have learned about the universe from the limited data we have collected with incredible human intelligence and creativity. He will pay tribute to the late Vera Rubin, and how she discovered a phenomenon that no standard theory can yet explain (and why she should have been awarded a Nobel prize).