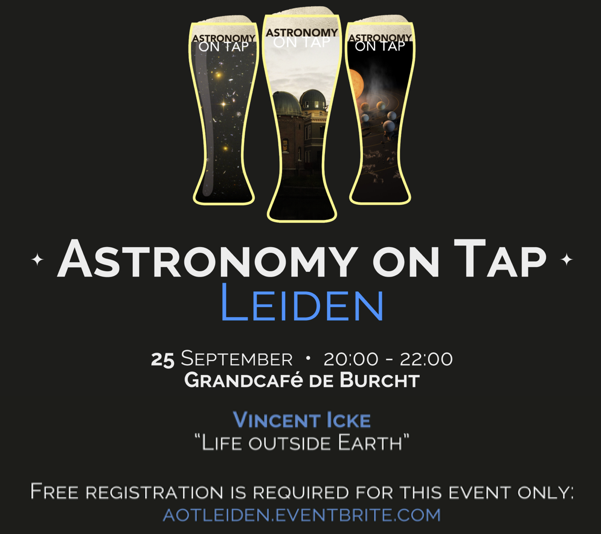 Our next edition will take place on Monday 25 September at 20h in Grand Cafe De Burcht (Burgsteeg 14, 2312 JS Leiden). Join us for an evening of informal astronomy and great beer! For this event, Leiden Observatory Professor Vincent Icke will guide us through different perspectives on one of the most exciting topics in today’s astronomy: life outside Earth.

REGISTRATION FOR THIS EVENT IS REQUIRED! You can sign up for free at https://aotleiden.eventbrite.com/ Note that attendance of this Facebook event DOES NOT imply registration, ONLY GUESTS REGISTERED AT EVENTBRITE WILL BE ABLE TO ENTER.

Vincent Icke is Professor of Theoretical Astrophysics at Universiteit Leiden and Extraordinary Professor of Cosmology at the University of Amsterdam. He studied theoretical physics and astronomy at Utrecht and obtained his doctorate in cosmology at Leiden. He did postdoctoral research at the universities of Sussex and Cambridge and at the California Institute of Technology. After five years on the faculty of the University of Minnesota, he moved to Leiden. His current research includes the origins of structure in the universe, radiation hydrodynamics, and the apparent conflict between quantum field theory and general relativity. Actively involved in presenting science to the general public, Vincent Icke publishes in many Dutch national newspapers and magazines. He is a regular guest on television broadcasts, such as De Wereld Draait Door and Nieuwslicht. Seven of his lecture series appeared on cd or DVD. He wrote many books, including The Force of Symmetry and Gravity does not exist. His latest, Reisbureau Einstein, will appear early October 2017.

Vincent Icke is not only an astrophysicist but also a visual artist. Not surprisingly, some of his artistic work is inspired by the visual aspects of the cosmos. He helped to establish the Faculty of Arts at Universiteit Leiden and is a member of the Board of Regents of the Gerrit Rietveld Academie.

For this event, Professor Vincent Icke will explore both the scientific and philosophical implications of life in other planets. In between the talks, there will be fun astronomical games and quizzes! Use this opportunity to improve your astronomical knowledge or just show off to your friends! NOTE THAT REGISTRATION AT EVENTBRITE IS REQUIRED TO ATTEND THIS EVENT!

Astronomy on Tap features scientists and educators who speak of their passion for astronomy and research. Professional astronomers from the Leiden area hold informal presentations on a wide range of astronomical topics, every last Monday of the month at Grand Cafe De Burcht.